Casino games are the entire rave for gambling lovers. With a myriad of card and table games at one’s disposal to play, it is no wonder why this is so. But some games are more appealing than and quite different from the others, one of which is the Money$uit 31.

Ever wondered how to win and gain mastery of the Money$uit 31 casino game? Yes? – Search no further. You are in the right place. Keep reading to know all about the latest table game in the world of casino plays.

Debuting at the Lac Vieux Desert Resort and Casino in Michigan, January 2015, the Money$uit 31 is a new one-deck three-card style casino table game of up to seven players who play the odds with an option of a single draw.

The dealer pitches three cards to each player face down, and for every play, a player receives one new card from the dealer. In this game, however, the house dealer does not play.

The regular blackjack scoring point system is used, where face cards equal 10 points, aces must always be 11, and other cards are worth their face values.

To guarantee a win at the game, you have to know what the Money$uit 31 rules are.

The aim behind Money$uit 31 is: get a combination of up to 3 suited cards to get the total point value of 17 or higher (31 max).

Just like any other casino table game, there are guiding rules to be followed. In the case of the Money$uit 31 casino game, the following are the rules and procedures for playing:

After that, chips are distributed accordingly, and the winning pay is multiplied according to the Money$uit 31 multiplier on the pay tables. 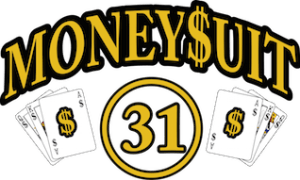 To give you an edge in the game, we advise you to play if you have any of the following hands:

At first glance, the Money$uit 31 may seem a daunting task or one of those casino card games too complicated to play. But once you get to it, it will readily become your best card game yet. Learn the ropes by following the game rules critically and taking to the play strategy, and you’d see that Money$uit 31 can be a walk through the park once you have mastered the art.