As online casinos continue to rise in popularity during the pandemic, it only makes sense that you might start to wonder about poker movies and card counting movies where people manage to cheat the system and win big money. Some casino movies are based on action, some on comedy, and you can even find a few casino movies based on true stories.

2021 saw the release of a new card counting movie called ‘The Card Counter’, which we will talk about later in this article. So, whether you are after true story gambling movies or just looking for another casino movie, here is a list of the best card counting movies you should watch or re-watch tonight.

These movies cannot be completely counted as card counting movies, but they count as casino movies that involve heists, action, comedy, and some are even based on real life stories. Watching these movies might make you want to look into playing poker or blackjack as well. With the huge variety of online casinos available, you can start gambling for fun today.

Let’s start at number 5 and make our way up to one of the, if not the best card counting movie made yet.

Starting at the bottom of the best card counting movies made, we have The Hangover. This absolute classic was directed by Todd Phillips and starred Bradley Cooper, Ed Helms, Zach Galifianakis, Justin Bartha and Ken Jeong.

Predominantly a comedy and action movie, the wolf pack (the name Zach’s character gives the group) heads over to Las Vegas to celebrate Doug’s (Justin Bartha’s character) bachelor party. Unfortunately, after an epic night of celebrations, they wake up suffering from a hangover the next day, only to realize that Doug has gone missing.

With no memory of what they did the previous night, the three boys try and figure out where their friend is and find themselves in all sorts of trouble as a result of their drunken activities at the bachelor party.

The card counting scene comes into play when the boys realize that they owe a ton of money to a gangster. With no other way of acquiring a large sum of cash in a short amount of time, they turn to Alan’s (Zach’s character) card counting skills to hopefully win the money they owe and find Doug before his wedding.

Initially filmed as a remake of the 1960’s film Ocean’s 11 with the ‘Rat Pack’ as the original cast, the 2001 version of the film was highly successful and grossed over a billion US dollars over the years. Following its success, the film was made into a trilogy with Ocean’s 12 and 13 in 2004 and 2007 respectively.

These aren’t precisely around card counting movies either, but they are heist casino movies that have been filmed well and will have you on the edge of your seat if you haven’t already watched it.

Classified as comedy, these movies revolve around George Clooney and his crew of highly talented individuals with varying skillsets that come together to rob major Las Vegas casinos with incredible style and flair.

The camaraderie and chemistry of the cast shine through as their dialogue and actions seem very natural and unplanned. This in itself makes the movie a great watch. Add in a fun and well thought out plot, and you’ve got a set of movies that will reignite your love for casinos and gambling once again.

High on the list of card counting movies, this film has Tom Cruise playing the role of Charlie Babbitt, who is the owner of a car dealership. Upon the news of his father’s death, Charlie expects to receive a large sum of money as his inheritance, only to find out that he has an autistic brother he didn’t know about who would be receiving all the estate instead.

In an attempt to get his hands on the millions of dollars, Charlie takes his brother Raymond on a cross-country road trip. Once Charlie learns that his brother has a photographic memory, he takes him to Las Vegas to use Raymond’s card counting skills to win $80,000 to pay off Charlie’s own debts. 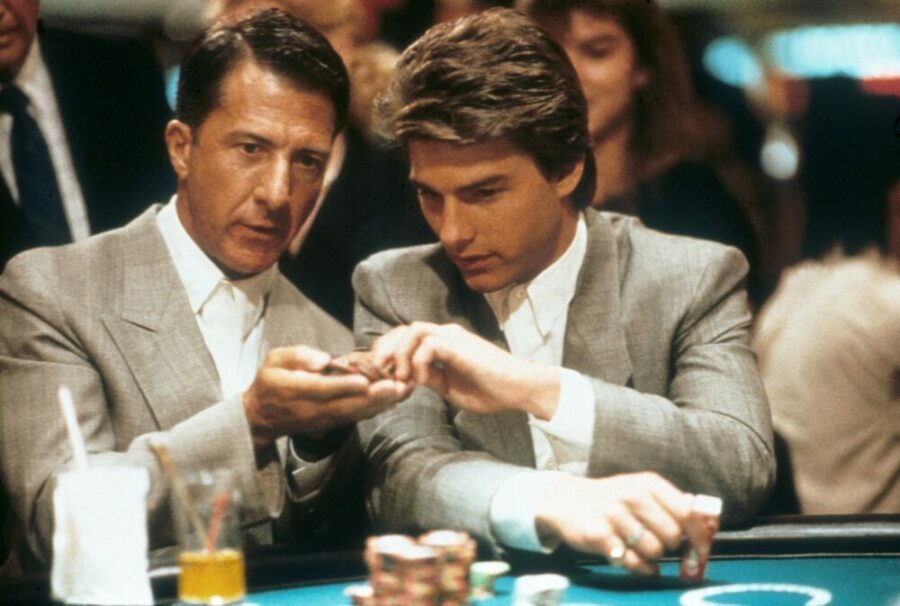 An interesting piece of trivia is that Dustin Hoffman’s character Raymond is based on a real-life individual named Kim Peek. Barry Morrow, the screenwriter for Rain Man, met Kim in 1985 and was blown away by his story.

Kim Peek was born with an abnormally large brain, and doctors advised his parents to institutionalize him. Going against doctor’s orders, Kim’s parents raised him at home. Soon Kim’s memory abilities came to light, and he could remember almost anything after coming across it once.

When Dustin Hoffman won an Oscar for his performance, he gave the award to Kim. That Oscar is now referred to as the “Most Loved Oscar Statue”.

Therefore, although this may not have been a true story gambling movie, there is the truth behind the character inspiration that makes this movie that much more enjoyable.

The story revolves around a borderline genius Harvard medical student named Ben, struggling to pay his enormous tuition fees with his part-time day job. Noticing his potential, his maths professor invites him to train under him in card counting and to join a group of other students who worked as a team that regularly goes to Vegas to card count and win money.

What initially started as a means to pay his tuition corrupted Ben, which caused him to go against the professor and keep winning large amounts of money. This causes major trouble between the team and also leads them to get into bigger trouble.

This is highly regarded as one of the best card counting movies ever made. What makes it better is that a team of MIT students did exactly this in real life. A professor created a team with some of the best students in the university and went to Vegas to win money regularly. At one point, the team had as many as 80 students.

You may have heard of the 2021 card counting movie aptly named ‘The Card Counter’, released in the US on the 10th of September this year. The movie is directed by Paul Schrader and sees the likes of Oscar Isaac, Tiffany Haddish, Tye Sheridan and Willem Dafoe as the main cast in the film.

Oscar Isaac plays William Tell in this thriller. William is a self-taught gambler who has spent 8 years in military prison. His past comes back to haunt him when someone recognizes him in a seminar. This boy happens to be the son of someone William used to work with back when he was employed in Abu Ghraib, a prison infamous for prisoner torture and abuse.

The boy’s name was Cirk. He has lost his father to suicide and blames it on his father’s superior, Gordo. In an attempt to help him, William teaches him to count cards and win in gambling. However, the kid is deeply hurt from losing his father and doesn’t want to deviate from his revenge plan.

The audience is taken through a rollercoaster ride of emotions with no possibility of guessing how the story finishes until the end.

Was Card Counter based on a true story?

Although it will undoubtedly be considered a fantastic casino movie, Card Counter is not based on a true story. Originally written by Paul Schrader, the script does not follow any true events. However, Paul admits that he was intrigued by the regular casino players who partook in an almost zombie-like activity and wondered why they would choose to live such a lifestyle. As a result, he created an exciting backstory for William inspired by real-world casino players.

Find Topic-Related Posts On Our Blog